As Seen on TV

Throughout television history, producers have experimented with bringing the big screen to the small screen. These projects have been met with varying degrees of success, from outright failure (both of the Casablanca series) to commercial and critical success (Buffy the Vampire Slayer). The transition from movie to television can be difficult to maneuver, with audience expectations, limited budgets, and restrictive plots, but producers continue crafting these episodic adaptations.

One of the oldest examples of these series is Casablanca, based on the movie of the same name, which aired from 1955 to 1956. The series was set after the events of the movie, focusing on Rick’s life and the bar after Ilsa leaves. The series used sets from the movie and featured actors who had minor parts in the movie, but gave them bigger roles; Dan Seymour, who played Ferrari’s bodyguard in the movie, played Ferrari on the show and Marcel Dalio, who played a crooked roulette table dealer in the movie, played Captain Renahult. The series only lasted ten episodes, due to low ratings. There are a number of reasons why the audience failed to connect with the show; the major problem, however, was that the main actors and the story viewers fell in love with were replaced with cheap imitations. Casablanca is regarded as one of the classics of American cinema (the American Film Institute named it as the second best American movie in cinematic history), so audiences were unwilling to accept alterations to the story; they felt that the movie should remain untouched. As my mother said when I told her of this series’ creation, “Why would anybody do that?”

[youtube]http://youtu.be/qZ66ucu6o2o[/youtube]
This clip is from the first episode of the 1955 series Casablanca. It was posted by YouTube user verbusen and is used in accordance with Fair Use Laws.

However, producers did not learn from this initial failure, as a second Casablanca series, also titled Casablanca, aired in 1983. It stared David Soul, of Starsky & Hutch fame, as Rick Blane and lasted five episodes. Unlike it’s predecessor, this series was a prequel to the movie. Audiences refused to watch this series for the same reason they refused to watch the 1955 version: both tampered with the integrity of the original movie. This version also faced the problem of poor casting; as Michael Shonk states in his review of the series, “…none of the actors could match our memories of their characters as played by the original cast of the film.” The series excelled in other areas, winning an Emmy for Outstanding Cinematography for a Series. Still, viewer’s disinterest led to the show’s cancellation, proving that story and character are the most important elements of a series. The show’s inability to live up to expectations set by the movie presents a common problem with small-screen adaptations. Audiences will always compare it to the original, and if it doesn’t match up to that standard, they’ll tune out. 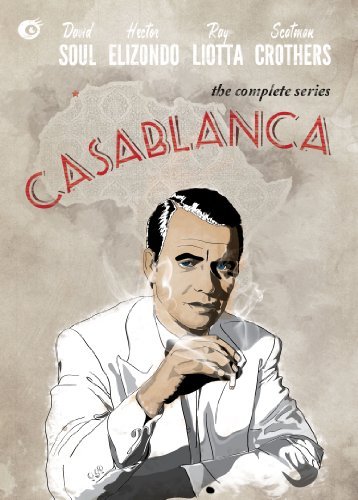 Casablanca 1983 poster copyright Amazon and used in accordance with Fair Use Laws. If you are interested in purchasing the series, it’s available on Amazon.

Perhaps that’s why one of the most successful movie-to-television adaptations was taken from a  source that many consider a flop. Buffy the Vampire Slayer, the movie, was released in 1992 and grossed $16,624,546 at the box office and was not well-recieved critically. Joss Whedon, who wrote the movie script and created the television show, was not satisfied with it. He used the time between the movie’s release in 1992 and the show’s release in 1997 to work out problems in the story. The changes worked; Buffy the Vampire Slayer lasted for seven seasons, spurred a television spinoff (Angel) and a comic series, amassed a legion of fans, and became a cult hit. Viewers found the story and the characters engaging, due largely in part to excellent casting and writing. Though the show ended in 2003, it continues stays relevant eleven years later, with Buffy conventions held worldwide and new fans discovering it every month on Netflix. The key to creating a successful television adaptation is understanding the source material. The reason so many television adaptations of movies fail (Clueless, Ferris Bueller’s Day Off, Dirty Dancing and Back to the Future, to name a few more) is because they attempt to recreate the movie without bringing in a new angle. The basis of transmedia storytelling is the idea that different platforms have different capabilities (so multiple platforms are used to tell a story in order to utilize as many elements of storytelling as possible). By ignoring television’s unique strengths and limitations, producers are setting themselves up to fail. The story of Casablanca does not play into the television format; viewers want to focus on the story of Rick and Ilsa, which is very limiting and has already been executed to near perfection. Buffy, however, knows its platform.The story of a girl destined to hunt demons has a lot more flexibility, allowing the writers to create seasons and seasons worth of material.

A great deal of thought has to be put into selecting which movies make it to the small screen. Producers must choose a movie that is not a classic, a plot that is malleable and a great team of writers, actors and crew members behind it. Without incorporating these elements into their shows, producers might as well be creating a third Casablanca series.