While it can be argued that the trend of transmedia storytelling has been around since early progenitors like the radio broadcast of Orson Welles’ War of the Worlds, it has definitely found a solid base in the information age. The advent of the internet and interactive media were the catalyst for its rise in popularity and relevance in the recent generation. The framework and ideas for ARGs and the like however came much earlier. During the early 20th century there were a select few writers and thinkers that would go on to predict many of the trends we see in media today. Writers like Flann O’ Brien were revolutionizing meta-fiction in the 30s, E.M. Forster  was predicting the internet in 1909, and around the same time in the 1930s and 40s in the basement of a library in Buenos Aires a young Argentine writer was revolutionizing the postmodern literature movement and predicting hypertext. This unassuming pioneer of fantasy literature is Jorge Luis Borges. Born to a well educated middle class family living on the outskirts of Buenos Aires, by age nine he was translating Oscar Wilde into Spanish, and by his teenage years he could speak and read English, French, Spanish, and German. Needless to say he was a pretty erudite man. His bibliography spans non-fiction articles, poetry, translations, and perhaps most famously, nearly one hundred short stories. These stories consist of things like forged histories, reviews of books and authors that don’t exist, falsified biographies; It’s no coincidence that he is seen as one of the fathers of modern meta-fiction. Their plots revolve around imaginary places manifesting themselves in our world, blue stones that constantly shift in number, books with infinite pages, a library that spans a universe, a point in space that one can look through and view the whole world, coins that drive anyone who views them insane, or detective stories shaped around the kaballah. With recurring motifs/obsessions of mystical tigers, mirrors and labyrinths, knife fights, Martin Fierro, Don Quixote, or Sigurd, all saturated with the mystical and metaphysical speculation. It’s easy to see that Borges was something special, and frankly a little weird, among the writers of his time period. Many authors in the post-modern literary movement cite Borges as an influence and every one of these stories has shaped modern media in some way. Two of these stories stand out as having large impacts on transmedia fiction in particular.

Cover of a 1983 English Edition of “Tlon, Uqbar, Orbis Tertius”

Perhaps Borges’ most acclaimed story, this like many other Borges stories, involves a fictional text that is asserted to be real. In searching for this text the narrator comes across a conspiracy by a secret society of intellectuals to create a fictional world, complete with its own distinct linguistic and metaphysical laws. By the end of the story it is clear that the land itself is becoming a part of our reality, perhaps overtaking it. Ideas or information taking physical form is a prominent aspect of the story. Obvious parallels can be drawn with Berkeleian Idealism but more importantly this can be seen as an early precursor to the ARG. The world of Tlon spreading artifacts from its reality into our own is very similar to the way certain ARGs form connections to their immaterial worlds with external objects or events, generally furthering the “this is not a game” concept employed by these kinds of media and lending the distinct motif of questioning reality and paranoia that many ARGs have. 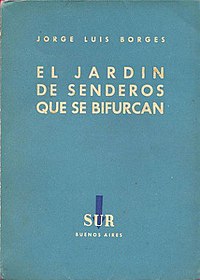 “The Garden of Forking Paths” is another one of Borges’ most renowned stories. The framing narrative for the work is a sort of detective story, not uncharacteristic of Borges in the slightest; the added layer of political espionage however is somewhat uncharacteristic. The underlying story tells of a Chinese spy for Germany who is trying to convey to his superiors that he has found the location of a British artillery yard in a town called Albert before he is arrested by his pursuers. Eventually he does this by murdering another character in the story named Albert, so that the newspapers would print the name and reveal the location of the artillery before it’s too late. This is a fairly clever and interesting story in its own rite but the narrative within the narrative is definitely the highlight and true purpose of the story. The Chinese protagonist’s ancestor was said to have abdicated his role as governor to construct a labyrinth (not in the least a surprising concept for Borges, who generally uses them throughout all of his work as a sort of representation of the infinite)  and write an immense novel. It is later revealed that the labyrinth and the novel are one and the same, the protagonist’s ancestor wrote a novel in which instead of only one narrative thread occurring in a predetermined path all possible outcomes of an event occur and are explained separately, these events in turn have their own branching narratives, and so on, and so on, ad infinium. The nature of the novel makes one think of Chaos Theory or perhaps the Many Worlds Theory , and this very well may have been the route he intended for it but purposefully or not he was also one of the first people to theorize hypertext. The branching nature of the novel is strangely reminiscent of interactive fiction that only became possible thirty or so years later in the information age. Almost all transmedia fiction in modern times uses some form of hypertext to advance a narrative and this short story definitely helped advance this

I think it can be clearly seen that Borges’ short stories have had some impact, directly or indirectly, on the trend of modern transmedia fiction. Perhaps not every ARG cites the the work of this early twentieth century polyglot directly but it has surely made an impact. Many of his other stories have ideas that relate to the topic of transmedia directly as well but even aside from his actual narratives the sheer pervasiveness of his thought in modern culture is surely a driving force. Borges insanely creative and surreal ideas on everything from ontology and metaphysics to linguistics and immortality can be seen echoed in almost every work of post-modern media. This includes not only the works of Pynchon, Vonnegut, or Wallace but more or less everything with any sort of meta narrative or interactive nature. I think as time goes on its safe to say that we will see that these concepts and by association Borges’ influence will only become more prominent. Although relatively unknown, Jorge Luis Borges and his stories have drastically affected the transmedia fiction movement and played a part in advancing it to where it stands today.